This post for Vegan Cinnamon Sugar Coated Baked Pumpkin Donuts was originally published back in 2016! Wow how time flies, With real life being so busy at the moment with work and university I haven’t gotten around to posting up any of the new recipes I have in the bag. To help tie you over till then I thought I would re-share these autumnal delights.

Is everyone enjoying the first flurries of Fall? Are you all fed up with pumpkin treats yet? Or are you like me and can never get enough of them? I love pumpkin season with a passion. It’s such a great ingredient to bake with, adding texture, flavour and substance to a bake. Especially a vegan bake, just like these Vegan Cinnamon Sugar Coated Baked Pumpkin Donuts that I am sharing with you today.

Light, fluffy and actually pretty healthy. I’m not going to be making any claims these are a health food and therefore eat as many as you like. But they are baked and if you leave off the coating the sugar content is actually pretty low.

But seriously, tell me where is the fun in that? The cinnamon sugar coating in these vegan cinnamon sugar coated baked pumpkin donuts is awesome and adds a lovely little warming spicy crunch to every bite, try not licking your lips while eating one of these bad boys! Traditionally you would get the coating to stick using melted butter, but to keep these donuts vegan I used some melted coconut oil as it has a pleasant flavour. But any plant-based spread or fat should work in its place if you are not a fan of coconut oil.

We are packing some serious spicy goodness into these vegan cinnamon sugar coated baked pumpkin donuts. A combination of cinnamon, ginger, nutmeg, allspice and cloves make up the spice mix or if you are lucky enough to live in a country which sells pumpkin pie spice already made up then you can use that instead. Or, if you fancy trying your hand at making your own then I have a super simple recipe to follow for homemade pumpkin pie spice. Whichever way these donuts will fulfil all your sweet spicy wishes.

Then added to that we have our cinnamon sugar coating!

Then we have the star of our Fall treat, pumpkin. Flavourful, not too sweet and definitely robust. Which is great for a vegan treat that has no traditional fat in it to help with the structure of the crumb. We use vegetable oil to help keep the crumb tender but it doesn’t do much for structure. The pumpkin really helps in this department as you can see from the image below.

Unsweetened almond milk helps to keep these vegan cinnamon sugar coated baked pumpkin donuts completely vegan. You can use any plant-based milk you prefer instead, but try and keep it unsweetened as we want to keep the sugar down to a minimum and keep the pumpkin and cinnamon the real stars here. So tell me, what are you waiting for? Grab those donut pans and get baking. 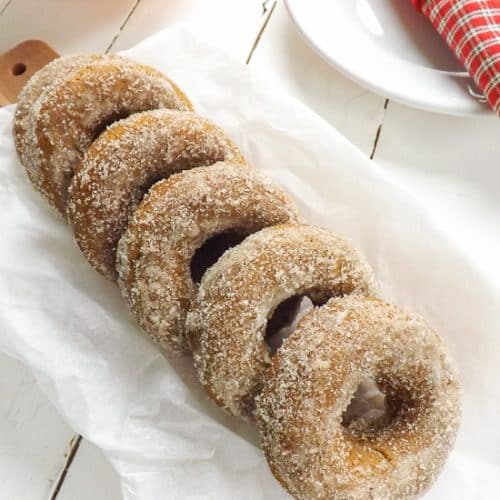