I hope everyone is keeping safe and are well. Today’s post apart from being super quick to make as they use a box mix as their base they are also really easy to make. These amazing Super Easy Funfetti Cupcakes are in part a celebration for finishing another year at University. And partly because at the beginning of lockdown baking supplies in the UK were like gold dust. The shelves were striped and online retailers were out of stock of almost everything.

In the back of the cupboard, I had a funfetti cake box mix from America that I had been meaning to do something with for ages. It was a Pillsbury Funfetti Cake Mix, don’t worry you can buy equivalent products in UK shops. They just tend to call them Rainbow Sprinkle Cake Mixes. But as we all know cake box mixes on their own when made as per the box instructions tend to be a little bland. So I swapped out some of the ingredients to add a little richness and a tad more flavour. And topped it with a sweet Almond flavoured buttercream, and of course a few brightly coloured sprinkles.

People tend to be totally for them or totally against them. I used to be in the latter camp, I hated them and everything about them. Maybe that was because in the UK they were terrible and beyond flavourless. Then baking became very popular in the last 5 to 7 years and companies upped their game. Giving those with no baking skills the ability to produce a ‘homemade’ cake. I still wasn’t convinced and the few times I tried them I was never impressed.

Then when I got into blogging and I saw that a lot of people were using them for convenience but actually improving upon the basic mix. Replacing flavourless water and oil with milk and melted butter. And on occasion adding extra eggs for richness. Yoghurt, sour cream, banana and even cocoa cola were all added ingredients. So I decided to give them another look.

Now, I don’t use them often, but I usually have one in the back of the cupboard for emergencies. These emergencies are usually I want cake but can’t be bothered to actually make one! Although the reason I had this one, in particular, was because I wanted to see if American cake box mixes differed significantly from UK ones.

There were a few differences, but certainly not enough for the average person to rush out and spend a fortune on amazon to import American cake mixes. UK ones will do just fine. But if you do want to try American box cake mixes and you are from the UK or even the rest of the EU I strongly recommend American Sweets. They have loads of American foods and their postage isn’t too bad and is free if you spend over a certain amount. But seriously, a UK mix will do, if you can’t find a funfetti/sprinkles mix then a vanilla cake mix will do and just add in your own sprinkles to make these easy funfetti cupcakes.

The three main differences for me were one, the vanilla flavour was a lot stronger than in UK mixes. This is typical of American sweets in general. They are a lot more generous with vanilla extract and I have to say I kinda like it. Texture, American cakes tend to have a tighter crumb than their UK counterparts and this mix will be a bit whiter than UK versions. British vanilla sponge tends to be a bit more yellow. I think this is down to the butter we use, ours is very yellow.

I really wanted these easy funfetti cupcakes to be as white as possible, so the sprinkles really stood out. To get them as white as I could, I used only egg whites. But I didn’t want to compromise on the flavour and richness that egg yolks bring to the cake party. So instead of using flavourless oil and water that was suggested I replaced them with milk and melted butter. I used semi-skimmed milk (half-fat) because it is richer than almond milk which is my usual go too.

This helped to give me the white cupcakes I desired. But if yours are a little yellower in colour because of the mix you use, it really doesn’t matter as long as they taste good.

To decorate these easy funfetti cupcakes, I used a lightly flavoured almond buttercream. I did try vanilla but I found it was lacking a certain something, for me at least. I found that the almond flavour cut through the sweetness a little better.

To make it even more colourful I sprinkled more, sprinkles over the buttercream, after all, who doesn’t love sprinkles? If this recipe has given you the incentive to try using cake box mixes in interesting ways then I have a few other recipes you may be interested in. One of the most popular recipes on my site are my Amazin Cake Batter Funfetti Cookies another is my Red Velvet Cake Batter Cookies and if you fancy something chocolate give this delicious easy cake a go Chocolate Peppermint Drip Cake.

I have probably bored you enough at this point, so I shall leave you with the recipe. Happy baking everyone and please stay safe and take care. 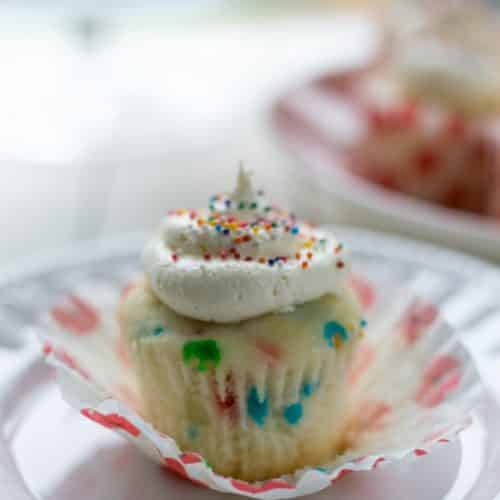